BBC Want To Back In Business With A Brand New Look

BBC started its illustrated journey in December 1997 in online industry on a low note. It had just two sections and the website design was far from impressive and so was the navigation. But, the message that it had delivered was loud and clear. Since then, with the changes of time, BBC website has undergone different transitional stages; some of which were really good and some were not. However, it had obviated the fact that BBC is not here to follow the trend rather, it is here to create new trend.

A Quick Recap of What It Had Been
But given the organic nature of its website and its structural complexities, it was very hard to put it in a new garb i.e. to give it a new look. Just two years ago, BBC’s website was mainly monitored by a group of independently working designing teams. Therefore, it was clear that the structure of the website was somewhat schizophrenic in nature (as pointed out By Bronwyn van der Merwe).

Global Visual Language 2.0
Next comes the most crucial stage, when people at BBC took initiate to make their website look modern and sophisticated and thus the concept “Global Visual Language 2.0” came into being. Its sole objective was the perfect unification of interactivity and visual pleasure to make its website more user friendly and irresistible in both mobile and web version simultaneously. To be honest, the final outcome was seriously sensational:

First, the old template was replaced by a new centered and wider one to exploit the advantages of wide screen resolution. Then an underline grid was created for the first time. A completely new navigating system was developed for giving a facelift to its local and global image. A universally embedded media player was later invented for filing up the vacuum that was created due to the discontinuation of different audio and video players in its newly developed website.

BBC’s home page was given a clean new look, which appeared really impressive and highly engaging both in mobile platform and in web. The concept of Web 2.0 was captured and reflected precisely in its new structure that had earned admiration and adulation from different sources.

Time To Move On
However, the successful launch of its new interface did not stop BBC from furthering its experiment with its website. It seems that BBC is gearing up for something big, something highly ambitious or something, which will be in sync with the philosophy of BBC. Now what they want to create is a design standard that will further simplify the journey of the users. It will be distinct yet simple to the core. Now, it may sound good to the ear, but the implementation of this intriguing concept requires a high level of technical skills and innovation.

It is unanimously accepted that people at BBC are good at presenting introspective information and compelling news to the global audience, but they are and have never been good at pulling together different technical issues for making an indelible impact on the readers. Being aware of this issue, BBC has roped in some bigwigs of design circle, and this has inevitably led to the formation of Global Design Working Group. This group is currently headed by a veteran Creative Director: – Ben Gammon. Research Studios and its owner Neville Brody have also joined the fray to create a new style guide that will be able to reflect the never-say-die attitude of BBC.

Setting A Design Standard
What BBC is trying to do, as it seems from its activities, is to evolve a new design philosophy that will sum up its achievements and its endeavor succinctly. Its new design will reflect these following aspects:

A Complete Personalized Experience
Inspiration was garnered from diverse sources to conceptualize design for its different segments, for example: embedded media player, iPlayer, homepage, news etc. Introduction of grid is on the anvil because grid is highly flexible and allows a great level of design variations without making things look clumsy.

A new grid system is all set to introduce in BBC’s website which is based on 31 sixteen pixel columns. In addition to that, it is split into one wide right hand column and two left hand columns that are further split up into four more sections. This flexibility will definitely allow the advertisements to appear in line with the rest of the elements of the website. 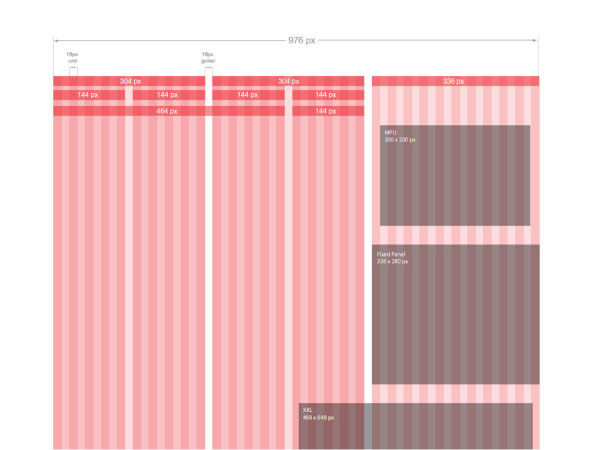 For the first time, an integrated 8 pixel baseline grid is going to be introduced in BBC website and what is even interesting is the dramatic use of topography. As far as the font is concerned, Arial and Helvetica are widely used for adding a greater level of consistency in the entire website.

Articulation and signposting are given utmost attention in content section of the website, which is evident in the below mentioned image:

Big bold icons are used in video section. Apart from that, left hand navigation system is giving way to a centralized navigation system. An all-new set of icons has introduced and this will certainly create a ripple in web industry.

To sum it up all, an exciting and refreshing visual treat is waiting for us all, and what we have to do is to wait few more days until it is unveiled by BBC.