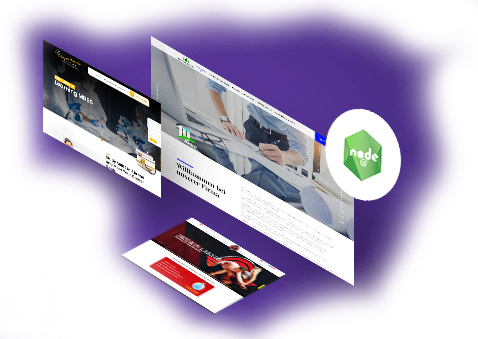 As an ISO 9001:2015 certified company, WebGuru Infosystems has satisfied its global clientele with results-driven Node.js development service. Hire our Node.js developers to craft highly scalable, real-time performance-oriented application within a quick turnaround time. If you are looking to engage the expertise of developing enterprise-level complex web applications at a cost-friendly rate, you are at the right destination.

Our programmers are efficient in developing REST, JSON, and XML APIs and seamlessly integrate these with your existing application. We are efficient in using the SOAP method that makes web services or the APIs platform-independent. We can develop custom APIs for databases, cloud applications, firmware and working frameworks, and Service-Oriented Architectures (SOA).

Our in-house team specializes in developing custom-made Node.js applications for small, mid, and large-scale enterprises. We have the resources and industry-exposure in AJAX and JSON communication, rich web app development and real-time web socket programming to cater to your specific business needs.

Hire our Node.js programmers to develop and integrate custom plugins into your application and extend & enhance its core features and functionalities. This will allow you to deliver an enriched experience to your users.

We can develop high-performing and interactive custom CMS enabled backend dashboard system to help you track and analyze the metrics and key data points. This will offer you a deeper understanding of your business and strategize accordingly.

We engage senior developers and project managers to review traffic-driven applications and immediately take action to help you seamlessly sustain your services. From installation to upgrades, configuration to troubleshooting and re-engineering – we offer a full-spectrum of maintenance solution.

We employ India’s best-rated Node.js developers to provide you with a futuristic and competent web solution.

It has a microservice-based architecture where applications are split into small pieces. Each piece can be developed, written, and deployed independently. This adds to the flexibility and scalability of the application and positively impacts its functionalities.

With all the aforementioned features, Node.js ensures a seamless and interactive user experience. It is ideal for a data-intensive and feature-rich application.

WHAT CAN WE DO FOR YOU?

Why Hire the Best Custom Node.js Developers from Us

Hire India’s Expert Node.js Programmers as per Your Convenience

… And Discover the Potential of Your Business!

We offer you complete flexibility to hire Node.js coders as per your business requirement. Check out the engagement models below and pick your preferable one.

Duration: As per your requirement Billing: Weekly

Duration: As per project scope Billing: Milestone based payment

As enterprise applications have to uphold business continuity and progress, data security, and many more versatile aspects, developers are always on a lookout for the most efficient platform to build such high-end apps. And Node.js has catered to this requirement for quite some time now. Right since its debut, Node.js has helped many businesses to streamline their service and received Uber, Microsoft, LinkedIn, and Yahoo as some of its early adopters.Wondering the reasons behind the craze of Node.js in the developers’ world? This blog will explain everything. Before diving in, let’s take a quick look at what Node.js is, in case you don’t know it already!

How Digital Marketing Can Help

Your Business Beat the Competition